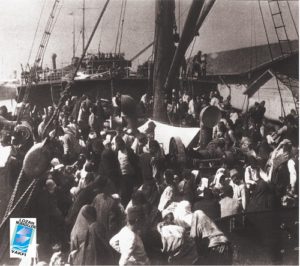 Pursuant to the Protocol on the “Exchange of Turkish Subjects of Rum Orthodox Religion Resident in Turkey and Greek Subjects of Muslim Religon Resident in Greece” signed between the Turkish Grand National Assembly Government and the Greek Government on 30 January 1923, approximately 2 million people from both countries had  to leave the lands on which they had born.

The homeland memoirs that we see today in the population exchange museums in the biçim of; ephemera, black and white photos and above of all, the inter-generationally transmitted homeland memories and the stories of journies to the new homelands embeded in he hearts have never been forgotten. The main reasons of the rememberence of the population exchange or in other words the exchange of souls  just two years before the centenary are; the transmission of culture and the accelaration of the migrations

Yes, this year we are living in a very different world…

Cause of the Corona virus pandemy, social and economic order of our world turned upside down. Health systems of the countries came to a halt. Thousands of people are lost everyday. The number of infected people is approaching a hundred million. So far, the number of deceased exceeded two millions. According to the Health Ministry records, the number of infected people exceeded two and a half million and the number of deceased exceeded 25.000 in Turkey. Among the losses, there are so many doctors, nurses and health laborers. We express our gratitude to our health personnel working with an extraordinary effort.

Infectious diseases is a fact of life. Humanity faced with pandemies in the past that caused the loss of millions of people. Infectious diseases are not alien to us as the exchangees. Despite the fact that these immigrants were taken under quarantine and inoculated in 1923 by a country that had just been to wars, almost each exchangee family faced the loss of its members.

The past experiences demonstrated that CORONA VIRUS will not be the last public health crisis. World Health Organization calls all the states to invest more on the public health. Besides, the WHO underlines that the Covid-19 vaccines should be distributed equally to all. We wish that all the people can be inoculated orderly and effectively by the help of cutting-edge technology.

“Vaccine Passport” is one of the latest debates. The visa obligation of the exchangees to visit the lands that their elderlies were born and grown up  were further aggravated now by the “Vaccine Passport” discusions.  It will impede our visits seriously. We wish that this “Vaccine Passsport” will not be enforced during this COVID 19 pandemy process in order not to give way to new pains and splits.

We suggest that all the citizens, especially the disadvantaged groups that are badly affected by the shaken economy cause of the pandemy, should  be supported by effective measures to help them with their housing and livelihood problems.

In our country, Romani is one of the most disadvantageous groups, who are found among the exchangees as well. They still have serious housing, education, employment and health problems. We would like to underline that their urgent problems should be resolved permanently.

We expect that the European Union should  take necessary measures urgently to provide healthy life conditions for asylum seekers, refugees and the migrants under the temporary protection status in Turkey as antother disadvantaged group.

Because of the cruel war in our neighbouring country Syria, millions of people left their lands to save their lives, around four million of them took refuge in Turkey. We emphasize that these people should be able to return to their homeland and restore their lifes in a peaceful  environment.

As was expressed in our common declaration in the previous year, we believe that:

-The visa enforcements should be abolished

– For the resolution of the problems between Turkey and Greece, notably the use of resources in the Eastern Mediterranean, the questions should be approached temperately and diplomacy should prevail.

– We repeat our suggestion to declare 24th July as LAUSANNE PEACE DAY  to underline the significance of peace.

On the 98th anniversary of the Population Exchange and Lausanne Peace Treaty, we wish that the conflicts and wars will come to and end and peace and democracy will prevail for all the peoples of the world. We remember those who lost their lives on the migration routes, in the terrorist attacks and coronavirus pandemy with respect and God’s grace.

We present to the public with respect. 30th January 2021

69 foundation and association operating in Turkey